The freezing cold of the Arctic Ocean is brought to life using the same technology that created the red planet in Ridley Scott’s “The Martian.” 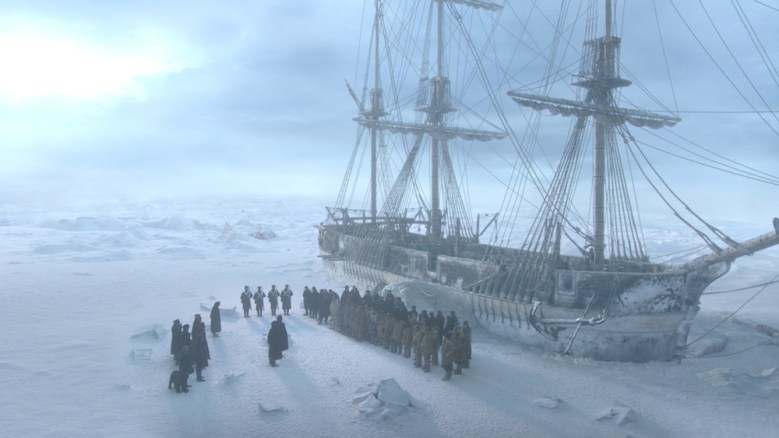 This is not real. (Photo: AMC)

Soo Hugh’s first impression of “The Terror’s” true story isn’t far removed from viewers’ initial reaction to the show itself.

“I was not familiar with the Franklin Expedition,” the co-showrunner and executive producer said, referring to the 1845 Arctic voyage meant to carve a path through the last uncharted section of the Northwest Passage. “But the minute you read about it, you go, ‘Wait. This can’t be true. How did we not know about this?’”

Those same exclamations may very well have been uttered by fans watching the first episode, but not because they shared Hugh’s reaction to survival story; it’s because they were Googling the unbelievable backstory of its production.

“The Terror,” for all its thick coats, icy exteriors, polar plunges, and shivering actors, was not shot on location. Though taking a film crew to the Arctic’s icy seas was obviously never on the table, most of the series wasn’t even shot outside, and the scenes that were took place during a Croatian summer that crept up to 84 degrees. The frigid cold cutting through this period drama was created the new-fashioned way: with CGI wizardry.

That fact may be easier for some to believe than others, but the fact that a show that draws such life from the cold wasn’t shot in the elements is nearly as astonishing as how convincingly the VFX replace the real thing.

When I interviewed Hugh and co-showrunner, executive producer, and series developer David Kajganich, little was known about “The Terror.” A few episodes had been provided as screeners, but it was January 2018, nearly three months prior to the show’s debut. So going into the interview, one question came quickly to mind:

Soon-to-be-Shamed IndieWire TV Critic Ben Travers: Where did you shoot? How much of it was outside and exposed — when people were actually cold?

Hugh: Where do you think we shot?

Travers: I tried to look it up in the AMC press notes [and couldn’t find it], but it felt like you went somewhere like Greenland.

Hugh: What if we told you that was all 360-degree visual effects?

Travers: Get out of here.

Kajganich then explained — between chuckles at the stunned critic sitting across from him — that they used “the same vendor and same methods” Ridley Scott (an executive producer on “The Terror”) developed for his 2015 film, “The Martian.”

“Obviously, he didn’t shoot that on Mars,” Kajganich said. “He shot a little bit of it on location […] but mostly it was digital.”

“We looked at all these locations, but at the end of the day, with how long we were going to be on this shoot and the number of episodes we needed to do in our narrative, shooting on a stage made the most sense,” Hugh said.

This was shot inside. (Photo: AMC)

In fact, “The Martian” and “The Terror” were both shot on a soundstage in Budapest, Hungary, and used visual effects to build new worlds — albeit one slightly colder than the other. Even scenes that appear straightforward, like the submarine dip under the boat in Episode 1, were almost wholly created by digital artistry.

“You know the scene where [Henry] Collins dives underwater?” Kajganich said. “There was no water. […] I remember standing on set when they shot the dive scene thinking, ‘How is this going to work?’ And the VFX team was like, ‘It’s not just going to be fine. It’s going to be great.’”

“It’s amazing how much technology has come along to be a partner for us creatively,” Hugh said.

“No one’s really recreated this particular world,” Kajganich said. “We think of it almost like a science-fiction story. It takes place on a planet all its own, in a way. Our characters are a bit like astronauts.”

The actors were a bit like astronauts, as well, in that they were subjected to extreme temperature changes throughout the six-and-a-half month shoot. Kajganich described the working conditions as “a nightmare.”

“Actually, the winter in Budapest is freezing,” Jared Harris, who plays Captain Francis Crozier, confirmed. “They managed to save themselves a lot of money in the beginning because they were going to refrigerate the sets so that we [could see] all that breath, but yeah, they didn’t need to do that. It’s cold enough.”

For the first few months (while it was still winter in Hungary), the soundstage doors were left open to help recreate an accurate environment. Kajganich remembered the sets getting as cold as 15 below zero.

“But then we were also shooting with furs and wool outfits in at least 60-degree temperatures, which is really hot for the actors,” he said, noting how things changed when the seasons shifted from winter to spring.

“It was freezing cold [during the first two months], but it also heated up and we had to approximate those things,” Harris said.

This is real: the Croatian island of Pag. (Photo: AMC)

“They’re such good actors,” Kajganich said. “Watching them interact with green screens and green tennis balls and all this stuff, you think, ‘I can’t believe they’re pulling this off in front of our eyes.’ And then when we got to an actual location, we could see how relieved they were to be where they could just act and not have to fabricate reactions to things.”

That location was an island off the coast of Croatia called Pag, and before you think it was a walk in the park, let Harris correct you.

“It’s a summer destination, so there were a whole different set of challenges at that point,” Harris said. “There were also 200 mile-an-hour winds. We watched our sets blow away. ‘Oh, there goes my tent. Oh, that’s tomorrow’s set blowing away.’”

Yet no matter the extremes, the cast and crew didn’t lose perspective.

“It was nothing compared to what they had to do,” Harris said, referring to the real sailors from the Franklin Expedition. “In the dead of winter for them, 30 minutes on the ice, and you were risking heart failure — even with all the layers they had on.”

Harris — whom the showrunners remembered getting so excited about the role, did his own research on the voyage — then described the ship’s “crazy” heating system. Running constantly, the Terror derived heat from the burning oven in the kitchen. Its heat was carried throughout the ship, but Harris said the lower decks were “like the tropics.”

“You had to get all your layers of clothes off or you’d be sweating,” he said. “Then you’d have to go up on deck, if you’re called to do something, and you’d throw your clothes on or you’d freeze instantly. So you’d have layers of ice: The moisture on your body would freeze immediately. Often, [the sailors] would come down, take off their clothes, and they’d start to crack the ice off their bodies. What they went through was insane.”

“It makes you realize how weak you are,” Hugh said. “When I was in New York last week complaining about 9-degree weather, I was like, ‘Stop! You can’t complain! Look what they went through!’ It really puts things in perspective.”

With so many hard-to-believe extremes, from temperatures to the production itself, “The Terror” sets an exciting standard for television moving forward.

“Watch: When we finally shoot at a real location, you’re going to come back to us and say, ‘Was that greenscreen because it looks fake?’” Hugh said with a laugh. “It’s almost like reality looks fake in some ways after a while.”

Watching “The Terror” — much like “The Martian” — it’s easy to believe anything is possible.

This interview was originally published by IndieWire. It has been reposted here for posterity.